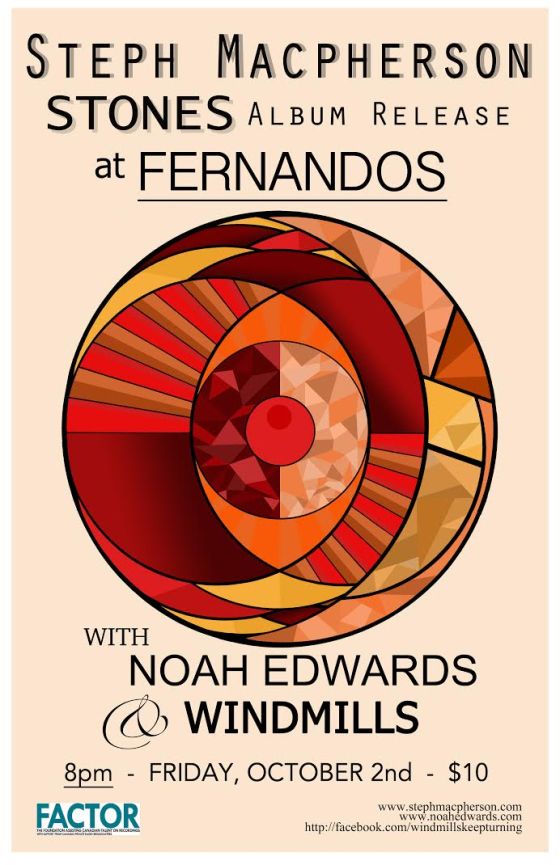 September 22, 2015 (Victoria, BC) – Following the release of her incredibly successful debut album, Victoria native Stephanie Macpherson has returned with Stones, a collection of songs that delves deep into the complexities of personal relationships. To be released on October 9 and distributed through Cordova Bay Records, Stones was produced byColin Linden and lays the foundation for Macpherson’s upcoming fall tour, which kicks off in Western Canada then makes its way through Ontario and Quebec.

Showcasing her finest songwriting to date, Stones delivers the beauty of Macpherson’s award-winning vocals mixed perfectly with the mature vision demanded of a sophomore album. Weaving back and forth between the complexities of overcoming fear, dealing with loss and gaining self-knowledge, the 11-track album creates relatable moments over and over again, allowing listeners to see themselves in the challenges Macpherson faced herself while crafting this album.

There is no question that sharing the stage with powerful female artists such as Sarah McLachlan, Erykah Badu andSheryl Crow has helped to define Stephanie Macpherson’s voice in the adult alternative space. From the perfectly balanced vocal harmonies of “Spark” to the hauntingly honest lyrics of “Wood & Nails” Macpherson continues to deliver heartfelt melodies that make people sit down and listen – a great feat for a young songwriter.

With an exciting fall ahead of her, Macpherson will kick off her fall tour on October 1st in Vancouver, wrapping up in Montreal on October 30th.  Touring alongside Noah Edwards, Windmills, Kent McAllister, I Am The Mountain, Dirty Mountain, Dan Kosub and Laurent Bourque, Macpherson has pulled together an evening of music that speaks directly to her incredible ability of bringing people together both on and around the stage.