Check out the show!

rio by night started as the solo project of front-woman, Britt MacLeod in the winter of 2010. A writer/vocalist with a bundle of songs she had written on her ukulele.

After a few months of going it alone, MacLeod teamed up with classically-trained cellist, Alex Hauka. The brightness of the ukulele, and the deep richness of the cello, with MacLeod’s smoky vocals made for a unique fusion.

In summer 2011, rio by night began recording a 6-song self-titled EP (to be released in May) with friend/producer, Andrew Rasmussen (Hey Ocean!, Dave Phillips). After the inaugural record was already in the works, Ben Whipple and Mike Lauder were enlisted to fill out the line-up with bass and drums respectively.

Now a collaborative project, rio by night has already begun working on their first full-length album and will hit the road for a tour of Western Canada summer 2012. 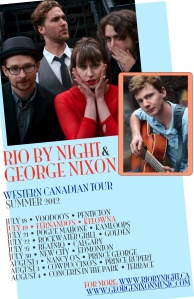